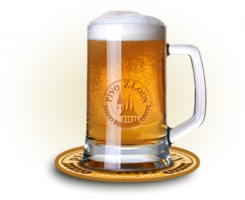 Pivo ZLoun s.r.o.  Beer from Louny s.r.o. is a company founded by Mr. Roman Tvrdý and Mr. Radek Taraba in order to build and operate a small brewery.

In addition to the construction of the brewery, we plan to expand the existing Sport bar Ája. Here we want to create a place for approx. 170 guests and to adequately reorganize kitchen, where during the day, we’d like to cook affordable meals and in the afternoon and the evening on menu should be meals done by order only. We will serve here only beer of our production.

The heart of the brewery will be, as it is now common, part of the restaurant and Brewer, if present, will conduct a tour of other operations.

As regards the range of produced beers, we're not yet firmly decided whether to produce all three, in the Czech Republic regular, grades of light beer. I'm sure we will produce a beer of twelve degrees, which name is already clear. Tvrďák, means Tough. In regard to beers of ten degrees and of eleven degrees we're dealing with pricing policy. The problem is that we do not want to cheat our customers, the cost of producing beer of twelve degrees, is only slightly higher than production of beer of ten degrees.

Large breweries solve it by boiling the stronger beer and later diluting it to the degrees they need. In particular, it will save the energy required to boil because it boils significantly less water. Also, spaces are not needed, because the beer ferments in smaller volumes than are later sold.

While this is a legitimate and lawful, however this is the way we won’t go, so it depends only on you, our customers if you will accept our prices for beers of less degrees.

The other beers, which will be manufactured at the new brewery in Louny, will be a partly dark thirteen degrees beer “JanTar ", then dark beer and for sure there will be some specials.

For example color yeast fermented ALE from none Zatec hop varieties, various fruit beers, and Christmas herbal beer. All of this depends on the interest in these products. 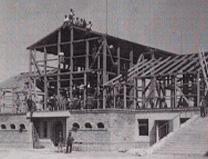